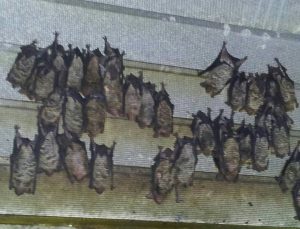 Most people shudder at the thought of having just one bat in their house. Can you imagine how you’d feel if your house was home to a bat infestation? Yikes!

During the colder months, bats like to look for warm spots to call home… so they’re drawn to attics, chimneys and walls. If bats have a nest in your home, they’ll return to that same spot year after year. If and when they multiply, the colony can get out of hand.

What are some issues if you have a bat infestation?

You’ll probably notice their droppings. Their poop is known as “guano” or “dung.” It looks like little black or brown pellets in a pile. Bats also leave a greasy film around the entry point to the house, so if you notice a “dirty spot” on your home’s exterior, it could be from bats.

Bat droppings aren’t good for people to be around because they can carry a fungus known as Histoplasma capsulatum. Long story short, if people inhale particles from dry bat poop, they could get a lung infection known as histoplasmosis, which could conceivably be fatal if it spreads to the whole body. Meanwhile, when bat poop breaks down, it releases airborne pathogens, encouraging bacteria to grow in your house. This can negatively affect your attic’s structure and your insulation. Oh, and it will smell bad, too. And bats could conceivably die in your walls leaving a terrible stench.

If a person or a pet gets bit by a bat, there’s the risk that they could get rabies. Nobody wants rabies.

Instead of removing droppings and bats yourself, it’s best to call a professional company like Critter Capture to come do the dirty work for you. In Mobile, Alabama, Critter Capture can be reached at 251-680-5068. You can also email rick@critter-capture.com.