Call Us to get rid of Nuisance Bats in Your Home

Bats – People are most likely to encounter nuisance bats when a roosting colony takes up residence in a building. Attics often make excellent habitat, as do barns. Bats need only a half inch or less of space to crawl through in order to enter a building. Once inside, if the habitat is good, the colony grows until the homeowner notices the bats flying out of the building, notices the droppings in the attic, chimney, outside, or even basement (when the droppings fall down the walls). Sometimes a bat will get lost and find its way out of the attic and into the living area. Occasionally a transient bat may also fly into a house. Bat removal requires experience. 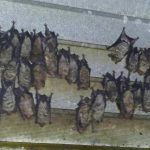 Bats become a nuisance when they roost in large numbers in human dwellings and bats love attics. The rapid and smelly accumulation of guano (droppings) is unpleasant, and serves as a fertile breeding ground for a fungal disease called histoplasmosis which is transferable to humans who breathe in the fungal spores. Bats are also known to carry rabies, a viral disease that causes progressive paralysis and death in mammals, including humans. Many people don’t like the droppings littering the ground, or the noise the bats make, or the odor they emit, and many people are simply uncomfortable around bats.

Getting rid of bats requires experience. I have worked on hundreds of bat problems in many residential homes.  I have excluded colonies estimated at approximately 3000 members! My bat removal system ensures that the colony will no longer use your home as a roosting area, and that no bats can get back in. I care for the welfare of these beneficial creatures, as do many environmental agencies, so I do not aim to kill any bats. I merely exclude them from the premises and make sure they can’t get back in. I also thoroughly clean the biohazardous droppings that they leave behind. Experience counts when working on bat jobs, and it takes a skilled eye to get the job done right the first time.

Many people don’t know where to turn when seeking bat removal. The removal of bats is not the kind of thing that you’d hire a bat extermination company, that is not legal or ethical, and not the right way to get the job done.