Raccoons are usually classified as a pest species due to their habits of living in human dwellings. The most common complaints include the following: 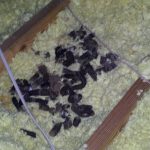 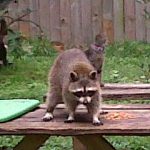 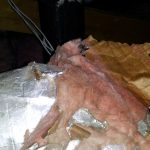 Raccoons have no trouble living in conjunction with humans, and have found our dwellings to provide excellent sources of food (trashcans & pet food) and shelter. Raccoons will find any entrance to your house, oftentimes causing damage to get in and if suitable, decide to set up a den. Chimneys are often a popular choice, as are attics and other crevices in a house. You don’t want a raccoon as a housemate. They make quite a bit of noise, scratching, growling, walking around, and if juveniles, crying.  They cause damage to the house, prying new areas open. Once they are in, they can cause extensive damage to your attic. They will search hard for food, and tip over your trashcans.

Raccoons also pose a serious biohazard. They are host to a number of parasites and diseases that can infest people or pets. Raccoons can carry and spread Canine Distemper, a common and often fatal disease of dogs. It is caused by a virus and is spread most often when animals come in contact with the bodily secretions of other animals, such as raccoons, who are infected with the disease. Raccoons are also carriers of Rabies, a viral disease that causes progressive paralysis and death in mammals, including humans. Any raccoons exhibiting abnormal behavior, such as fearlessness toward humans, awkward and slow movements, or excessive daylight activity should be strictly avoided.  Dens or other heavily utilized raccoon areas may be infested with the eggs of Raccoon Roundworm. This parasite can cause severe health problems in humans who accidentally inhale or ingest the eggs found in raccoon feces. This is of particular concern when children’s play areas are nearby. Every effort should be made to remove raccoon feces from areas frequented by people. Critter Capture offers attic cleaning services with the aim to destroy 100% of harmful agents. Learn more about Critter Capture and their Pest removal services.