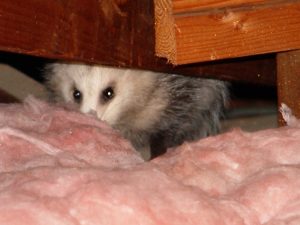 If you’re like most people, you rarely if ever see an opossum. They’re active at night, so it’s not like you’d see them in the daylight unless they’re sick or roadkill. Now, that said, you might find evidence that an opossum is near your house. For instance, say you have cement steps leading up to your front door, and suddenly a hole appears on one side of the steps. You think to yourself, “Maybe it’s a rabbit, a skunk, or a raccoon?” There are all sorts of critters, right? Well, maybe it’s an opossum, and because they’re active at night, you might have no idea what’s burrowing under your steps until a critter control guy comes and traps the thing!

Opossums are the only marsupial found in North America. They are related to kangaroos! They usually live alone, grow up to 40 inches in length, and can look like the size of a house cat. Well, size-wise they may look like a cat, but looks-wise? They look like a giant rat. Indeed, they have long, pointed faces with rat-like tails. They’ll show their sharp teeth and hiss at you if they feel threatened.

Opossums Can Cause Damage to Your Home

Opossums can mess with your house. They can tear ductwork or insulation. They can damage your lawn while digging for food. And if you have chickens on your property, they’d love to destroy them. While they rarely have rabies, they can have other diseases as well as fleas and mites.

Opossums should live where there aren’t many people around, because they’re decent animals who deserve to live– but they shouldn’t live near or in your house.

So, if you think you might have an opossum problem, call Critter Capture of Mobile, Alabama, at 251-680-5068. Typically, an opossum can be trapped and then transported far away, so they can still enjoy their life, but not near you anymore.